Reading a front-page article by Phillip Ryan and Wayne O’Connor, in the Sunday Independent newspaper edition of 13 May 2018, an exposé of the situation existing in Leinster House were almost half of all TD’S are as individuals, each personally worth over a million euro primarily from the pockets of the electorate! streetdogs.blog the word on the street, has to ask the question, is this what the Irish Democratic Republic is really all about?
We have TD’S spending decades after decades in Leinster House at the expense of the electorate while they and their families spread their power and influence over the lives of Siobhán and Seán citizen, all-powerful and remote from them, rather like the Robber Barons of the middle ages and the disdainful Irish Ascendancy families of 19th century Ireland!

A Constitutional limit to the number of consecutive times a person may hold a Seat or indeed unsuccessfully stand for election to Leinster House would go a long way to reforming this problem, as would the provision of voters option to select NONE OF THE ABOVE on ballot papers.
But of course, Phillip Ryan and Wayne O’Connor exposé demonstrate very clearly why our so-called Democratic Representatives have no stomach for meaningful reform of Leinster House , a bit like the one about Turkeys and Christmas and Thanksgiving!

Writing today in the Irish Independent in the comments section addressing the issues around the manner in which all sides conduct their campaigns in this forthcoming and previous  Referendums and elections, be they local or national, as also the issues surroundings alleged foreign interference by way of advertisements and commentary or financial contributions to influence the outcome in favour of one side or the other !

However, Ian O’Doherty puts very well the case in respect of the issues surrounding foreign advertising and comments attempting to influence voters decisions, that the complainers on all sides of the issue of the referendum subjects complaining of such foreign efforts should get over themselves and trust the intelligence of the electorate!

streetdogs.blog the word on the street suggest that if he has not already done so, perhaps  Ian O’Doherty might turn his attention to addressing the same insightful observations to the Democrats in the USA  that these things are part of the new processes, and that they should likewise get over themselves! 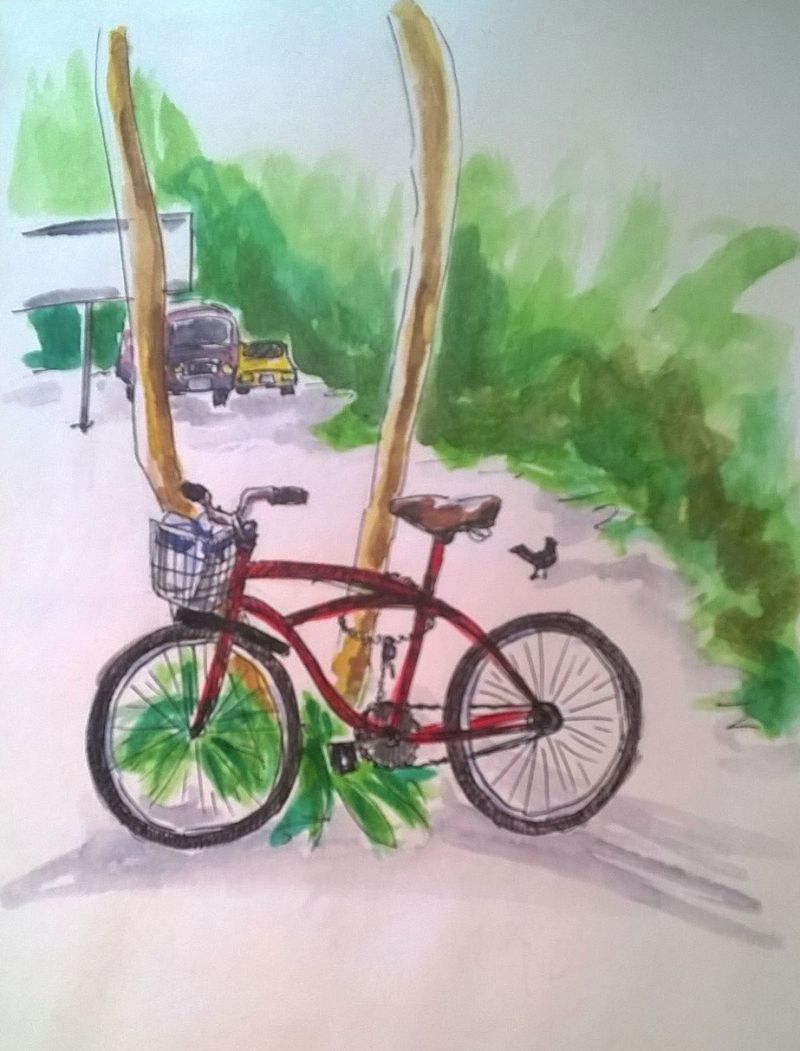 This was my bike during the 2 weeks I stayed there. I usually parked it next to these palm trees while at the beach. It was rather rusty because of all the salt and sand but it served me well.

via At the beach in Tulum, Mexico — Melanie Franz

streetdogs.blog the word on the street, wishes to congratulate Shane Ross, on his success in promoting to the Citizens Assembly a proposal to advocate a Constitutional Referendum for an amendment ,  setting a fixed term for the lifespan of a Dáil term of office  and other than in certain  exceptional circumstances, restricting the powers of An Taoiseach to advise An Uachtarán na hÉireann to dissolve the Dáil and call a Dáil election !

The Nation and its Citizens are being given to understand that this in the interest of the expression of their democratic will as expressed in the outcome of the ballot that determined the distribution of seats in the relevant Dáil! That this actually radically empowers a small minority of TD’S beyond their elective mandate, seems not to be an issue for those whose personal interest is advanced by this proposition.

Now  while our  many Democratic Paragons are advocating  and promoting  multiple items supposed to empower the Citizens of  this State in the delivery of a truly Democratic process, strange to  say, these same paragons seem to be totally opposed to promoting the notion of a Constitutional limit to the number of  consecutive Dáil terms a person may hold and/or stand for election to. A cynical person might suggest that’s something that requires putting the interests of the Citizens Democratic empowerment above one’s own self-serving notions!

As we all know, as a result of matters arising from aspects of the recent Belfast trial, relevant bodies and authorities in this jurisdiction, are reviewing multiple factors and issues involved in the conducting of similar such trials in this State!

streetdogs.blog the word on the street wishes to advocate to those relevant bodies and authorities to give serious consideration to introducing the option for a jury to return verdicts as currently exist under Scots Law, that is to say, one verdict of conviction, that is to say, Guilty  and two of acquittal,  that is to say, one of Not guilty  and one of Not proven!  This format is strongly supported by the Scottish  Rape Crisis Centres! Perhaps their Irish colleagues might like to consult with them as to their perception of the positive contributions such an introduction of this aspect of Scots Law would impact such trials in this jurisdiction!

streetdogs. blog the word on the street welcomes our readers’ comments on this idea.

SECOND )  IS MYTAXI MAKING SENSE OF YOUR CENTS?

FOURTH ) REFERENDA AND THE PIED PIPER!

The Tonight show on TV3, with  Matt Cooper and Ivan Yates, 11pm, Tuesday 3rd April. Featuring a potential Presidential Candidate, one Kevin Sharkey, was very interesting and entertaining, possibly even informative! One of the entertaining moments was the paradox of a member of a party whose title translates as” our selves alone, “refuting the chauvinistic aspirations of the potential Presidential Candidate who was echoing American President Donal Trump’s battle cry, “our land, our people first”

Having seen Kevin Sharkey previously on a chat show, sporting a jersey emblazoned with the legend ” I AM A RACIST ” and then stating that this was not to be interpreted as considering others being of an inferior status but a wish to promote Ireland and the Irish first in national policies! One is given to wondering does this person have the understanding of the very considerable difference in meaning of those two frequently abused words chauvinist and Racist, and if not, is such a person of the caliber required to represent Ireland on the international stage! Or is this progressing on the principle, there is no such thing as bad publicity on the road to celebrity status?

Encouraging aspects of the various verbal exchanges ( one could hardly say debates ), were hearing some of the guests speaking of and advocating somethings, about how our so-called Democracy could and should be reformed, such as reducing the team of office of the President, and with a compulsory election for the office! The regular readers of this streetdogs.blog, the word on the street are familiar  with streetdogs, blog, the word on the street advocacy of change and reform  of the election of Candidates for Public Office,  including  a limitation on the number  of  consecutive terms a person may be permitted to stand for election and hold office  as a TD! Again it was encouraging to have some of the panel stating that the time was ripe for a conversation on the style and mechanisms of our Democracy!